On 1-9-20, an offender assaulted several officers in the HU6 Classification office area. When CCMII Leeder responded  and subdued the offender and placed him in restraints, preventing  potentially serious harm to multiple staff members.

P4P had 15 dogs graduate the Healing Paws Program this month.  There were 15 previous graduates adopted this month

During a staff assault in December 2019, CO I Joseph McBride responded to the aid of three other officers.McBride arrived on scene, took control of the offender and restrained him preventing further harm to the officers. McBride’s quick reaction to the call for help and his disregard for his own safety should be commended.

NAACP made a donation to the TJW Family Charitable Foundation in the amount of $200.00.

P4P had 10 dogs graduate the Healing Paws Program in January. There were two previous graduates that were adopted this month.

On multiple occasions, through CO I James astute observations, we were able to prevent the offender population from obtaining a dangerous item that could have subsequently resulted in harm to staff and offenders.  His wealth of knowledge, experience, and dedication makes him a valued asset to SCCC and the DOC.

Healing Paws had five dogs graduate the program this month.

SCCC had a CIT graduation

NAACP held their annual Founding Father’s Banquet on 08/24/19 with six guests in attendance.

NAACP distributed their fundraiser that was sold in June

Healing Paws had 11 graduated this month. 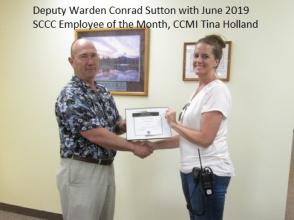 Gavel Club made a donation to Gateway 180 Homeless Services in the amount of $150.

Gavel Club made a donation to Texas County Food Pantry in the amount of $100.

Michele Buckner was promoted this month from Deputy Warden Offender Management to Warden.

Gerald Otto, CO I, Transfer in from JCCC

Crowder College brought students to SCCC for a tour of the facility. The Restorative Justice Program gifted the college with a quilt that was made at SCCC.

SCCC staff participated in working the concession stand at the Licking PRCA Rodeo.

The following dogs graduated from Puppies 4 Parole and are awaiting their forever home: Asha, Dobby, Joker and Ruby Lou.

CO I Tim Moravec and CO I Amy Moravec were presented with Distinguished Service Awards on April 16, 2019. On December 14, 2018, Tim and Amy were returning to SCCC from an emergency medical out count / hospital admission to Jefferson City.  Approximately 20 miles north of the institution they came across the scene of a head-on collision that had just occurred. Tim assisted in directing and controlling traffic in order to prevent any further accidents, while  Amy  provided medical aid to the injured party who was involved in the accident. Both officers remained on scene until police and emergency crews arrived and were in control of the situation. Despite having already been on duty for 17 hours, these two officers never hesitated in their decision to render aid and assistance to their fellow citizens in their time of need. Their actions exemplify the high degree of dedication to the welfare of the citizens of Missouri that members of the general public so rarely hear about.

Awards on April 22, 2019 and April 24, 2019. These officers worked together to save the life of an offender who was experiencing a serious medical emergency.

Personnel Club had a Krispy Kreme Donut Fundraiser with proceeds going to the Community Easter Egg Hunt and a delivery date of April 23, 2019.

The adoption rate for April is 44 percent.