Puppies for Parole operates through our partnerships with animal shelters and animal advocate groups statewide. In Puppies for Parole, selected offenders in Missouri prisons have the opportunity to become trainers to rescue dogs. Offenders teach dogs basic obedience skills and socialize them, making them more adoptable. Once the dogs have successfully completed the program, they are adopted through their original shelters.

The program saves dogs' lives, helping to find forever homes for abandoned and stray dogs. Since the program started in 2010, more than 6,000 dogs have graduated from training and have been adopted.

Offender dog handlers are enrolled in an apprenticeship program through the U.S. Department of Labor. Through formal training, individualized study and on-the-job training, offenders earn a certificate in animal handling, which is recognized in all 50 states. Puppies for Parole gives offenders the skills necessary to support successful rehabilitation and reentry, ultimately improving public safety. Participants have higher employment rates and lower recidivism rates after release. They also benefit from the opportunity to give back to Missouri communities. The program has a profound effect on inmates and staff, improving safety, security and morale in the facilities.

Benefits to the Community 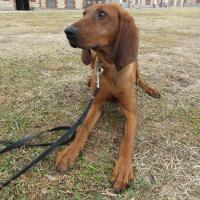 In 2018 Puppies for Parole celebrates the adoption of 5,000 DOC-trained Missouri shelter dogs since the program's 2010 inception.

Ellie, the designated 5,000th dog, is a redbone coonhound mix from Grabb Animal Shelter in Fulton, Missouri. When she was four months old, she was enrolled in the S.T.A.R.S. (Socialization Training for Animal’s Reentry into Society) P4P program at Algoa Correctional Center (ACC) in Jefferson City, Missouri, to learn basic obedience. Ellie was adopted at first glance by ACC employee Brian Hogue, who already had coonhound at home and knew Ellie would be a perfect addition to his family. 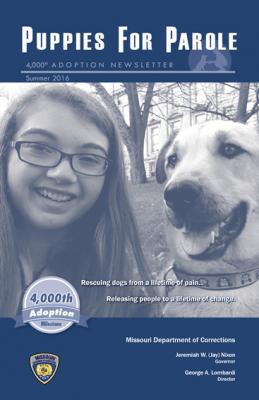